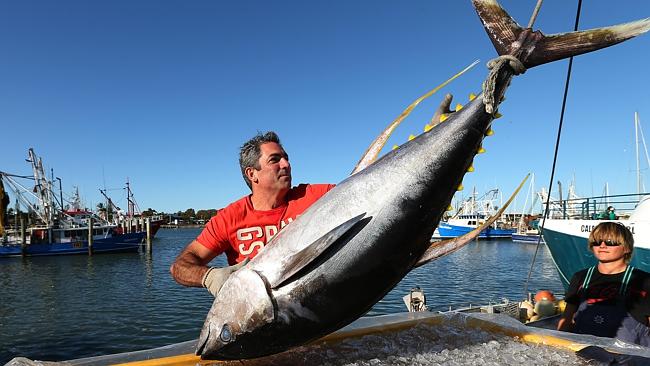 Plump seagulls glide watchfully above the masts of bobbing boats as a huge yellowfin tuna — tied by its tail to a boat’s boom — swings heavily towards Pavo Walker.

The fisherman, his hands encased in mesh metal gloves, grabs the fish by its slick silver gills, frees the tail and gently lowers the catch into an ice-filled crate, just after sunrise on a brisk ­Sunshine Coast day.

It’s a gamble every time Walker’s four-boat fleet leaves the Mooloolaba dock in search of tuna and swordfish in the bountiful waters off eastern Australia, and it’s at this moment, while unloading his crew’s haul, that Walker discovers whether this week’s gamble has paid off.

But now, Walker and his wife Heidi — who built Walker Seafoods Australia from one small wooden boat in 2001 to become the biggest tuna fishers on Australia’s east coast — are not only gambling their livelihoods on the tides. They’re rolling the dice on something great, and groundbreaking, for the Australian seafood scene.

Today, the Walkers become the first tuna fishers in the country to earn the international gold standard for seafood sustainability, the costly and coveted Marine Stewardship Council certification, for yellowfin tuna, albacore tuna, and swordfish.

The fishers spent four years and $350,000 working to secure the status, aiming to cement their premium sashimi’s place on the plates of some of Australia’s best fine-dining restaurants, and to reverse the misconception that ethical foodies would rather be caught wearing fur than ordering tuna.

As seafood consultant John Susman, owner of Fishtales, tells The Weekend Australian, the Walkers are taking a calculated risk to stay relevant in a world where sustainability is as fashionable as wagyu on high-end menus.

Back on Queensland’s Sunshine Coast, the sky is cloudless and there’s a chilly breeze blowing as Walker helps his crew — now woolly haired and stubbly chinned after a week at sea — unload the catch from the 21m Assassin and the 23m Santa Lucia, which docked just after dawn.

They’ve been fishing nearly 100km off the coast of Mooloolaba, the country’s busiest port for wild-caught tuna, and had landed about 20 tonnes of yellowfin, six tonnes of big-eye tuna, and a couple of tonnes of albacore, by the time they hauled their gear in at 4pm the previous day. That rates as a very good catch.

On the water, the tuna are hooked by a longline, which takes about five hours to peel off into the water. Every 30m for kilometres, there’s a hook that dangles up to 50m below the ocean’s surface and is baited with frozen squid. At any one time, there can be 2000 hooks in the water and each boat may catch only 30 tuna on a good day. But when each yellowfin tuna can weigh 70kg, and when the finest yellowfin can command 3000 yen a kilo ($32/kilo) at the Japanese fish markets, a good day can be lucrative. “One tonne a day keeps the bank away,” Pavo Walker says, laughing.

The on-board crew gill and gut the fish immediately, before placing them in plastic bags to preserve the pristine and tiny silvery scales, and then into refrigerated brine, kept at minus 0.5C. Keeping the flesh as close to zero as possible ensures the fish retains the rosy colour diners want to see on their plates. “With sashimi, it’s all about presentation,” Walker says, adding that yellowfin’s high fat content means it doesn’t freeze until minus 3C.

To assure the global, not-for-profit MSC of the sustainability of their operation and the broader fishery, the Walkers flew independent Macalister-Elliot & Partners from London to Australia for four days to present data and scientific research backed by the Australian Fisheries Management Authority and the CSIRO. Green group WWF watched on.

Eventually, after the face-to-face visit and a years-long investigation, the auditors were satisfied that the Eastern Tuna Billfish Fishery, which extends from the tip of Cape York to the South Australia-Victoria border, had sustainable fish stocks (a quota of only 2200 tonnes of yellowfin a year is able to be caught under Australian law), the Walkers had suitable bycatch procedures (no great white sharks, longfin mako or blue or black marlin are able to be kept, for example) and the fishery was effectively managed. (Australian regulations are among the strictest in the world.)

Still on the Mooloolaba dock, Walker follows the large tubs of tuna into a noisy nearby shed, where fish-grader Gary Heilmann is in his element. Dressed in a white plastic apron, the managing director of DeBrett Seafood is “tail grading” the freshly caught fish. Bulky men heave the fish on to the silver metal table in front of Heilmann, who takes a large knife, slices a section from the tail, holds it up to the light and — with his 11 years’ experience in the shed — grades it within seconds. Freshness, colour and fat are considered.

“Plus 3C, fish of the day! Japan!” Heilmann yells, instantly deciding the final destination of the fish in front of him.

He turns, and holds the pink slice of tuna to us: “See, it’s bright red, shiny and glossy, with a good rosy colour.” The tail is the least fatty part of the fish, he explains, so if there’s fat marbling through the tail meat, it augurs well for the body.

“Fat is flavour,” Walker says, as he takes a bite. “That’s beautiful. The Japanese say good sashimi should melt in your mouth. This melts in your mouth.”

And it does. The pink, fleshy yellowfin is rich and impossibly fresh. Walker Seafoods exports most of its catch as fresh fish to Japan, to the world’s most discerning sashimi eaters, and the US, where Americans like to throw lower-grade sashimi on the barbecue. Some is sold at Sydney and Melbourne’s fish markets, and some ends up on our restaurant plates.

The Walkers hope the MSC certification will open up new markets for their tuna. For the first time, their fish will be on the shelves of supermarkets in Switzerland and The Netherlands, stocked by companies that don’t give a producer a second glance without an MSC endorsement. Susman reveals he’s also working with the Walkers to develop a range of preserved, cured and smoked tuna and swordfish to sell in supermarkets domestically.

“The real win here is going to be not only in the fine dining sector, but with lower grades of tuna that have been pretty hard to sell in domestic fresh markets,” Susman says. “For the first time, Australian supermarkets could stock cans [of tuna and swordfish] with the MSC label. Commercially, that lifts the value of the total harvest, and that’s really important because Pavo’s costs of production are so much higher than fleets in Asia or Central America.”

As the weather warms up in Mooloolaba, we head up the road to Spice Bar, chef Aaron Ruttan’s Asian fusion restaurant. Ruttan serves fine slivers of the rosy-pink fresh-caught tuna as sashimi, artfully arranged on a crisp-white plate, dotted with dollops of anchovy cream, crescents of onion, and salty, green stalks of beachy succulents. Then, he turns out bowls of barely cooked, sesame-crusted tuna fillet in a fragrant, slurpable Sichuan broth with rice noodles. Both dishes are delicious.

Spice Bar is just one of several high-end restaurants the Walkers hope to convert to MSC eco-labelled establishments. The process is not as laborious for restaurants as it is for fishers, and at $1400 costs significantly less, but before the Walkers started their recruitment drive only three restaurants in Australia carried the tag: Fish & Co in Sydney’s inner west, Neil Perry’s Rockpool Bar & Grill in Melbourne and the View Cafe at Sydney’s Taronga Zoo. After their first round of evangelism, the Walkers want to add Spice Bar, Noosa’s Wasabi, Stokehouse in Brisbane, Matt Moran’s ARIA restaurants, the rest of Neil Perry’s Rockpool group, and Andrew McConnell’s Cutler and Co to the fold.

Adrian Gutteridge, MSC’s Australian-based fisheries assessment manager, says restaurants that carry the MSC ecolabel give diners peace of mind about the seafood on their plate.

“If you want to trace your MSC piece of tuna you’re eating at a restaurant, you can,” Gutteridge says. “At every stage, from the fish getting caught to getting onto your plate, it’s fully traceable.”

WWF policy manager for seafood markets, Peter Trott, agrees, praising the Walkers for being “leaders in this industry”.

“Recognition of MSC in Australia is still quite low, we haven’t had that much product available,” Trott says. “But when you talk to consumers and prompt them and ask, ‘Does sustainability matter?’, [it turns out] consumers are concerned about the long-term future and sustainability issues.”

Wasabi owner Danielle Gjestland, whose menu is dominated by locally and sustainably caught seafood, says the MSC label is a shorthand way of convincing sceptical foreign diners of the green credentials of Australian tuna.

Albacore: A white-meat tuna, known in America as the ‘chicken of the sea’, Albacore is used in small quantities as sashimi in Japan and rarely in high-end restaurants in Australia. It’s inexpensive and the smallest of the Australian tunas, growing up to about 25kg. Seafood consultant John Susman, of Fishtales, says Albacore has been “much-maligned in this country as not one of the great culinary tunas. But the way Pavo (Walker) handles them, there’s a significant point of difference. It has a delicious mild sweetness and a really soft buttery texture.”

Yellowfin: Walker describes the fish as his “superstar aesthetic tuna”, the most brightly coloured of the tunas, boasting a glossy, red flesh perfect for display on sashimi plates. “It’s a sexy fish to barbecue; you can leave it bright red on the inside of the steak if you sear it,” he says. Yellowfin is fast-growing — it grows about 10kg a year — and can grow up to 75kg.

Big eye: This species holds more fat than yellowfin or albacore, so is more highly prized by the Japanese for sashimi. Apart from Blue fin, Susman says big eye is the Japanese’s pick for raw fish. “That’s because of its fat content, though it tends not to be as glamorous-looking as yellowfin,” he says.

Southern blue fin: The most controversial of the Australian species of tuna, SBT has the potential to grow to the biggest, fattiest, tastiest fish. Typically caught in nets and then transferred to floating pontoons, it has the potential to be overfished, as it’s the easiest to catch in bulk. Walker doesn’t catch SBT, and in order to earn MSC certification, is not allowed to.